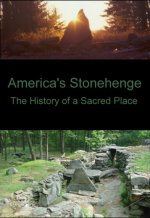 By: Produced by James Gage and Mary Gage

This film reconstructs the 2500 year cultural history of the America's Stonehenge archaeological site located in North Salem, NH. The complex of stone chambers, standing stones, niches, and other stone structures at the site served as an important spiritual and ritual center for a group of ancient Native American people. For the Native Americans this place was sacred. Construction of this ritual complex began over 3,000 years ago and evolved through five major periods of construction and change until its final closure with the arrival of European colonists. The Native Americans left an extraordinary archaeological record of their ritual activities and spiritual beliefs. Author and independent researcher, Mary Gage, has meticulously researched this site for many years and has successfully reconstructed its cultural history. This film is based upon her book, "America's Stonehenge Deciphered" (2006). 40 minutes