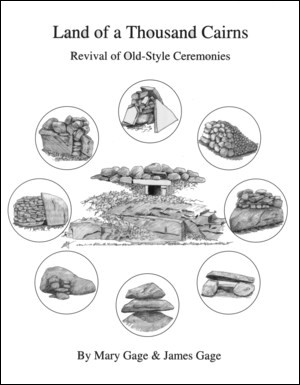 *** IMPORTANT NOTE *** We have a few copies of the Revised First Edition available at a discounted price. A new 2nd edition has been issued. From the time of the American Revolution to the end of the 19th century, Lawton Foster Road in Hopkinton, Rhode Island was home to a small rural community. A few families eked out a living on the rocky poor soils through growing corn, rye, potatoes, apples, small scale sheep farming, and timber harvesting. Today, the land has reforested and much of it has become wildlife conservation property. These lands harbor a big mystery. Over 1500 stone structures have been found including stone cairns, three stone chambers, several serpent effigies, enclosures, niches, triangle symbolism and other odd man-made features. These are in addition to the more recognizable historic structures like house and barn foundations, stone walls, and two saw mill sites. Who built these enigmatic stone cairns? When? And for what purpose? A dedicated team composed of stone structure researchers, field documentation team, local historians, and conservation people set out to unravel this mystery through documenting the structures, researching the genealogy of the families who lived there, deed research, and analysis of the structure themselves and their relationships to each other. The results of this multi-year effort were a major surprise. The findings challenge conventional historical and archaeological assumptions about these stone structure sites.